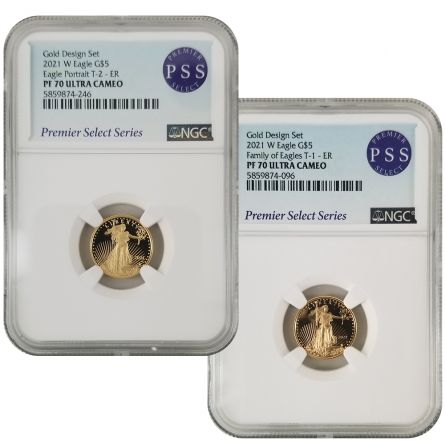 The original or Type 1 reverse of the Gold Eagle was created by artist Miley Tucker-Frost, an artist from Texas. This design appeared in the coin from the year 1986. It was sculpted by Sheril Joseph Winter, who then served as a U.S. Mint sculptor engraver. When the artist came to know that the U.S. Mint was looking to create its own bullion coins to compete with those from world mints, she thought she had an epic eagle design for the reverse that would for once depict not a single eagle but a family of eagles. The design showcases a male bald eagle carrying an olive branch back to its female companion and hatchlings.

The backstory of the invention is not well known even among coin collectors. This design was a culmination of a six-year journey for Tucker-Frost that began when she heard Ronald Reagan's acceptance speech at the 1980 Republican National Convention. The speech debated on the idea of Americans coming together for the common good and led the artist to the concept of showcasing a family of eagles that represented America as a caring family. The design that came from that inspiration was turned into a sculpture which was later selected by the Republican National Committee as the official Commemorative for Reagan’s first inaugural.

After she learned about the upcoming program for the American gold bullion coin, she began urging people in her state and in Washington D.C including the members of congress to support putting the design on the reverse of the new gold coins. Finally when the legislation was written, it used precise language about the reverse design that basically described the artist's design but did not mention her name. Later it was selected by then-treasury secretary James Baker. The design was chosen for the $50, 1- ounce version.

In 2019 the United States Mint was looking to change the reverse design of the American Silver Eagle. It was not known officially outside the Mint that they were also on the lookout to change the reverse design of the American Gold Eagle. Last October, the Mint disclosed the new Type 2 reverse that will begin appearing on 2021 Gold eagles around the middle of the year. After receiving recommendations from the Committee of Fine Arts (CFA) and the Citizens Coinage Advisory Committee (CCAC), Stephen Terner Mnuchin, the U.S. treasury secretary, selected the new Gold eagle reverse design. It is a bold design that depicts a significant change in how eagles have been portrayed in the American coinage since the Mint founding in 1792.

Artist Jennie Norris designed the second reverse design. This time, the design represents a closeup profile of the bald eagle's head facing left, surrounded by statutory inscriptions above it for United States Of America, E Pluribus Unum, and In God We Trust. These letterings are separated by three stars on either side of the eagle. Below them emerges "50 Dollars" and "1 O.Z. Fine Gold". The eagle has a fierce gaze, and the design is exhibited in such detail that its beak and dense plumage look very realistic. She could portray such a stunning design because of her experience as a former raptor handler and her detailed up-close study of birds. She has stated that "I hope to capture the intensity of his stare through the close cropping" of the design.

The design was sculpted by Renata Gordon, who has been a U.S. Mint sculptor engraver since 2010. This fresh design will continue appearing on the Gold eagles for at least the next 25 years as required by an 1890 law.

The 2021-W American Eagle Tenth Ounce Gold Two Coin Deluxe Edition went on sale from the U.S. Mint on July 29th. However, was restricted to release just 5000 sets. This set consisted of both versions of the American Eagle tenth-ounce gold $5 coin. One is featuring the reverse of 1986 and another with the reverse of the 2021 design. We have these sets certified PERFECT PF70 by NGC in our exclusive "Premier Select Series" label.

More Information
Reviews
Write Your Own Review
Only registered users can write reviews. Please Sign in or create an account
ShopCSNTV - 100% Guarantee

We're confident you will be satisfied with your purchase, but if not, you may return your item for a refund or exchange within 30 days of invoice date. Shipping and handling charges are non-refundable, and the product must be returned complete and in sellable condition to qualify for a refund. Refund amount will include full purchase price and all collected taxes.Seals and cases contribute to the value of coin and currency collectibles and must remain intact and unbroken. This applies, but is not limited to: grading cases, Mint and Proof cases and packages, bag seals, original government sealed packaging, certificates of authenticity and/or any other special packaging or containers. Customers are responsible for shipping charges and risk of loss on all return shipments. All returns must be shipped by a reputable shipper and be properly packaged and fully insured. Products returned after 30 days of shipping date are subject to a 20% restocking fee.